One of my major goals for this year was to improve my time trial. Being light has many advantages, time trialing prowess is not one of them naturally though. It is never a bad thing to work on really, it improves your chances in most stage races and requires improvements in FTP. That said, I thought it was particularly useful for me to work on. My time trialing last year was close to if not right at abysmal. My times on the local monthly time trial, the South Mopac Extension, and 8 mile TT were 3 minutes slower than the good riders in Cat 3. It would be a big shot to my stage race goals, add the fact that I was planning to do 3 stage races with important time trials to that and it just made sense.

As part of my regular training I was doing lots of 2x20 and 2x30 during the off-season to improve FTP, something I would have done whether or not I was targetting TT's, the big change was position work. Last year I had the following position for TT's. 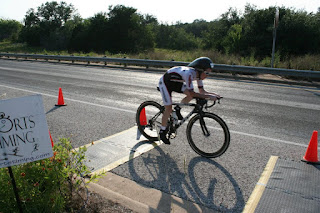 It is a pretty decent "Ironman" position, but I was using this position for all my TT's. For that it was pretty darn abysmal. Step one was a largely negative stem. Removing about 3cm of stack. Putting me at the following (I apologize, my webcam sucks for quality): 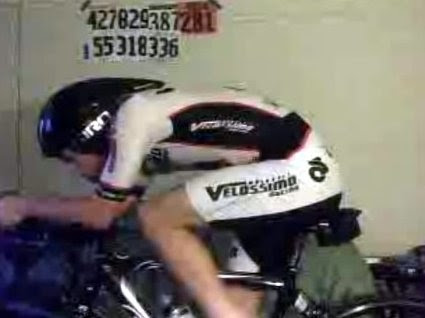 This was a bit improvment, but I knew I could rotate forward and down more. Next came some aerobar trickery. I flipped my Profile T2+ bars upside down, and strapped the pads onto the base bar. I removed another 2-3 cm of stack. Putting me here: 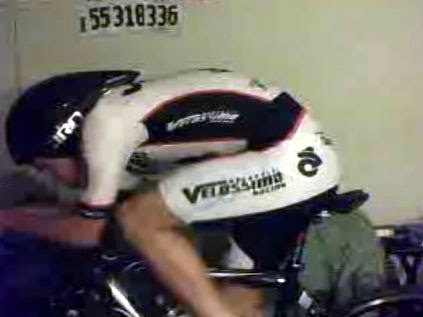 Much better or aero, power output I was concerned about but on the road it actually worked out alright. I did end up doing one more swap, I switched to some aerobars that had a lower stack while still giving me something to really settle my arms into (I found that without the "cup" shape of the pads my arms slid outwards. Unfortunately, I do not have a picture of this position

I was pretty happy with this position (and I finished mid pack in a TT with it), but saw some room for improvment. For one, the arms were SUPER close together, which I kinda liked but it is clearly straining my shoulders and pulling them down which makes it hard to allow my head/neck to sink. I needed to shrug my shoulders intead of pulling them forward. My arms are also pointed down, gross. I was also sliding off the front of the saddle during the TT, and moved it forward more after this. I widened the bars and angled the bars up a bit. This mostly concluded my fit changes, some small tweaks but nothing noteworthy. Now came the TT riding.

The next TT was the Killington TT, which I already discussed. I had some great power output and finished top third in the stage, with my front brake rubbing. After that I had nothing big on the schedule, planning to do the State TT just to see what I could do. I drove back home, going through colorado and doing some great riding there. No real training, just going out and riding for fun. I decided after I got back to sign up for the Ironhaus TT on June 15th, to get some practice with the pacing for the effort. I had a target of 235w for the event and decided to go out at 225-230w and try and come back with whatever I could. I ultimately missed that power target, averaging 225w the whole way. But I broke an hour, one of my big goals for the year. 58:48 was my time, 2nd in the open division. It was a small event but I was happy with my time, very happy.

At this point I realized that a TT bike would certainly shave good time off my time. I searched and thankfully Jack Mott put me in contact with Christopher Stanton who hooked me up with a TT bike for the race. I got it just in time to blitz the South Mopac TT, where I beat my personal best by 3 minutes. Obliterated my goal of 18 minutes, doing 16:57. Then I mostly stopped riding. I did one set of 2x20s, a 2.5 hr endurance/tempo ride and then nothing right up until openers. I was just kinda burned out on training, and the TT stuff was supposed to be a fun different break so I didn't do anything. 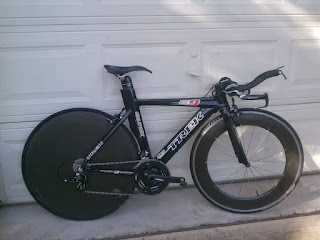 I decided to register for the U23 category for state, prospects of podiuming in the 3's were low. Possible but low, I knew of 3 guys who were definitely capable of beating me in the 3's. The U23 field was smaller though, we ended up having 3. I was second to go off. Nerves running high, it took me about 5 minutes to settle into pace. We had a strong tailwind for the first 10km, and I averaged 46.3kmh up to that point. Power was down a bit, but somewhat expected it to be given the heat and lack of training. Ultimately I averaged 218w for the 40k, good for a time of 56:20. 2 min and 28 seconds faster than my previous TT, on less power. To some extent I think conditions may have helped me a bit (warmer and drier), but a large part of the difference was probably the bike. THAT is the difference aero makes.

The results were good, and I ended up right were I wanted to. First place in the u23 division, I now have a state champion jersey. Big improvement from last year, and a huge testament to how big aero is.